Are Vapor Barriers Required or Recommended?

Vapor barriers are used in many construction projects as a method to reduce the rate at which vapor can move through a material. Vapor barriers, when installed properly, could reduce the condensation problems and will reduce air leakage on fiberglass insulated walls. Let’s say you don’t want to install the barrier, then water or moisture will be trapped in the wall producing moisture and other related problems. 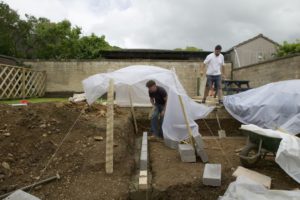 The vapor barrier can be installed in many areas such as walls or slabs but ultimately the installation process will depend on the type of plastic being used and the climate on which the building will be constructed.

Vapor barriers are measured in terms of much water or moisture will pass through the material. The International Residential Code defines three major groups of vapor barriers:

Class I vapor retarders provides less than 0.1 perm and the following materials can be considered as such.

Class II vapor retarders controls the rate between 1 and 0.1 perm and is applicable to the following materials:

Lastly, class III vapor retarders (between 10 and 1 perm) can be applicable to:

As mentioned previously, the environment plays an important role on the vapor barriers are used. If you are working in temperatures that range between 60 to 90 degrees, you can opt to use gypsum board and plaster as substitutes for the vapor barrier. However, in extreme climates, vapor barriers such as concrete blocks and bricks shall be used or are recommended.

These materials will perform better when they are installed towards the warmer side of the wall. In cold weather, vapor barriers should be installed towards the interior of the structure but always, independent of the weather, vapor barriers should form a continuous layer of protection. It is extremely important to seal and protect every opening reducing the probability of a leakage.

If vapor barriers are not sealed properly, the insulation will absorb vapor, reducing the capacity of thermal resistance, and will probably generate mold in the wall. Vapor barriers should not be installed on both sides of the wall as it will probably trap large amounts of moisture. Also be sure to control traffic or minimize it once the vapor barrier has been installed. Sometimes objects, rebars, and just people walking over the product might punctuate and damage the material. Another important area is that improper sealing might affect performance, as it happens normally along the edges as it is not sealed against floor to wall joints.

Can Vapor Barriers Be Installed in Existing Buildings?

Most of the time you will be called to remodel an existing building and you will note that there is no vapor barrier installed.

At that point, you might choose to seal the existing leaks instead of installing a new vapor barrier to minimize moisture movement in your building. If you are working in colder climates it is preferred to use vapor barrier paints, those that contain a high percentage of solids and thickness when applied. Paint manufacturers will annotate their perm rating, but remember that glossy paints perform better than flat paints, and acrylic paints too. If you are not completing a major remodeling project, it would be better and more practical to apply additional coats of paint, performing the same function as the vapor barrier. Remember that this has the ultimate goal of controlling moisture in basements, ceilings, crawlspaces, walls, and floors.

If you are planning to install vapour barrier follow these tips: