Here is an interesting NHS article on Damp and Mould. 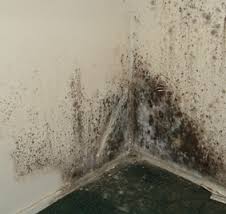 “If you have damp or mould the first thing to do is find the cause. Damp and mould can affect your health, so it’s important to get rid of it.

Causes of damp and mould

Damp and mould are caused by excess moisture. Moisture in buildings can be caused by leaking pipes, rising damp in basements or ground floors, or rain seeping in because of damage to the roof or around window frames.

In a newly-built home damp can occur if the water used when the house was built is still drying out.

Excess moisture indoors can also be caused by condensation. Condensation forms when the air indoors can’t hold any more moisture. Cooking, showering, drying clothes indoors and breathing without adequate ventilation can all cause excess moisture. Droplets can form on indoor surfaces such as mirrors, windowsills and on walls, particularly when they’re cold.

You can help prevent the build-up of condensation by:

Repairs may be needed to get rid of any leaks or to improve ventilation. Once your home has been repaired, or if your home is damp because it’s newly built, it may take weeks of heating and ventilating it to dry it out.

How to remove mould

Once you’ve identified and fixed the source of moisture in your home you can get rid of any mould. You may be able to remove mould yourself, or you may need to get a professional to remove it.

Protect yourself from mould spores by wearing goggles, long rubber gloves and a mask that covers your nose and mouth. Open the windows but keep doors closed to prevent spores spreading to other areas of the house.

If you require as assessment of the damp and mould situation in your home, please give us a call